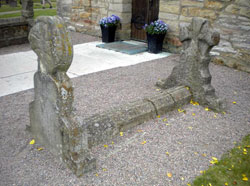 Martyred Swedish king, also known as Olaf Skottkonung He ruled Sweden from 993-1024 as the son and heir of Eric the Conqueror. Converted to Christianity by St. Sigfrid, he attempted to introduce the faith to Sweden. The chief event of his reign was his defeat of King Olaf I Tryggvason of Norway at Svolder in 1000 with the aid of King Sweyn of Denmark and Eric, Jarl of Lade. His efforts at Christianization met with sharp opposition from pagans, and Olaf was martyred at Stockholm by rebels after he refused to sacrifice to pagan idols.