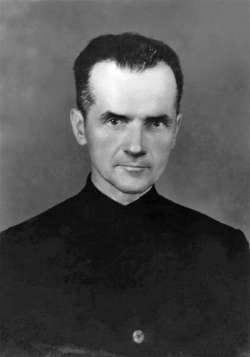 Oleksa Zaryckyj was born October 17, 1912 in the village of Bilco, region of Ukraine in Lviv (Lvov). In 1931 he entered the seminary in Lviv and five years after he was ordained to the priesthood by Metropolitan Sheptytsky as a diocesan priest of the Archeparchy of Lviv of the Ukrainians. In 1948 he was captured by the Bolsheviks and was sentenced to ten years in prison and deported to Karaganda in Kazakhstan. Released early in 1957, Oleksa Zaryckyj was appointed Apostolic Administrator of Kazakhstan and Siberia, but did not have time to receive episcopal consecration. Shortly after he was re-interned in concentration camp Dolinka near Karaganda, where he died a martyr of the faith October 30, 1963. He was beatified by Pope John Paul II June 27, 2001, along with 24 other victims of the Soviet regime of Ukrainian nationality.