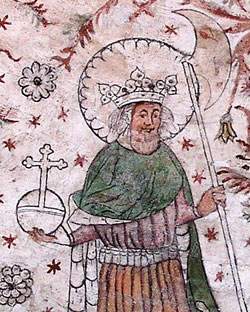 King of Norway and a martyr, also called Olaf Haraldsson. The son of King Harald Grenske of Norway, he spent most of his youth as a Norse raider until 1010 when he was baptized at Rouen. In 1013, he journeyed to England and offered his services to King Ethelred against the invading Danes. Returning home in 1015 after succeeding to the throne, he embarked upon a war to free Norway from the domination of the Danes and the Swedes, defeating Earl Sweyn at Nesje in 1016. He also immediately requested that missionaries be sent from England to advance the Christianization of Norway. Owing to the harsh nature of his rule, he faced a rebellion of nobles in 1029. Through the aid of the formidable King Canute of Denmark, the rebels overthrew him and drove him into exile in Russia. Olaf returned in 1031 but was slain in battle at Stiklestad, Norway, on July 29. While neither popular nor considered especially holy during his lifetime, Olaf was soon revered after death owing to reports of miracles occurring at his tomb. He was greatly respected as a champion of Norwegain independence, and his shrine became the foundation of the cathedral of Trondheim, which was a popular place of pilgrimage during the Middle Ages. He is the patron of Norway, and was canonized in 1164.

Today, we humbly ask you to defend Catholic Online's independence. 98% of our readers don't give; they simply look the other way. If you donate just $5.00, or whatever you can, Catholic Online could keep thriving for years. Most people donate because Catholic Online is useful. If Catholic Online has given you $5.00 worth of knowledge this year, take a minute to donate. Show the volunteers who bring you reliable, Catholic information that their work matters. If you are one of our rare donors, you have our gratitude and we warmly thank you. Help Now >
Continue reading about St. Olaf of Norway