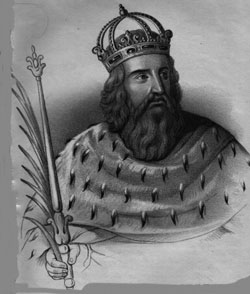 Eric IX of Sweden King of Sweden from 1150, Eric did much to aid Christianity in his realm and was responsible for codifying the laws of his kingdom, which became known as King Eric's Law (also the code of Uppland). He led a victorious expedition against the marauding Finns and persuaded English bishop Henry of Uppsala to remain in Finland to evangelize the Finns. Eric was killed and beheaded near Uppsala by rebelling Swedish nobles in the army of Magnus, son of the King of Denmark, who had invaded his territory, on May 18. Though never formally canonized, Eric was long considered the Patron of Sweden. His feast day is May 18th.