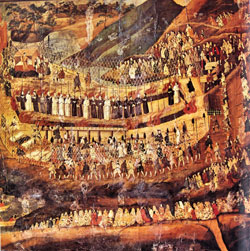 The men, women, and children who died for the faith from 1597 until 1873 in that country. The faith arrived in Japan in 1549, when St. Francis Xavier landed at Satsuma. He was recalled to India in 1551, but he converted more than three thousand Japanese in that brief period. Thirty years later there were 200,000 Christians and 250 churches in Japan, with Jesuits and other missionaries working to spread the faith. Hideyoshi, the acting highest-ranked official of the emperor, the governor, called a taiko, had tolerance for the faith, despite the fear of his court. Many in Japan believed that the Europeans intended to invade the country, and that the Church was only a vanguard. On Feb­ruary 5, 1597, twenty-six Christians, including eight European missionaries, were publicly crucified at Nagasaki. Hideyoshi ordered the martyrdom in 1597 , and when he died the following year, a period of cooperative calm prevailed. For the next decade and a half the Christians flourished, with 130 Jesuits, joined by 30 Dominicans, Franciscans, Augustinians, and some secular priests staffing missions. Unfortunately, Tokugawa Ieyasu, a virulent enemy of the Church, became the shogun of Japan and published an edict abolishing Catholicism. Persecution began again, furthered by Tokugawa's sons and heirs. In 1622, the "Great Martyrdom" took place at Nagasaki, claiming the lives of more that fifty Japanese and Europeans. Between 1624 and 1627, hundreds more were slain, imprisoned, or exiled. Most were burned alive, crucified, or beheaded, some with small children in their arms. In 1637, some 37,000 Japanese Catholics and their allies entered a fortress on Shimabara Peninsula in northern Kyushu to protest persecution of the Church and tyranny of the local daimyo, or hereditary clan lord. They were slain to a man by the shogun's troops, aided by a Dutch ship's cannons. In 1640, four Portuguese ambassadors were arrested and martyred for the faith, and their lesser-ranked entourage exiled. In 1642 and 1648, Jesuits and Dominicans tried to enter Japan and were martyred with unspeakable cruelty. The last known priest who tried to enter Japan was an Italian, Abbe Sidotti, who was arrested in 1708. He was imprisoned on the Kirishitan Zaka, the "Hill of the Christians," and died there in 1715. There are two large groups of martyrs in Japan, representing the thousands of Christians who died for the faith from about 1614 to 1664. The first party of martyrs was headed by St. Paul Miki, who received canonization in 1862 by Pope Pius IX. A second gathering of martyrs was composed of thirty-six Jesuits, twenty-six Franciscans, twenty-one Dominicans, five Augustinians, and one hundred seven lay men, women, and children. They were beatified over the years by several popes, including Pius IX and Leo XIII. Pope John Paul II has also beatified and canonized several individual martyrs in Japan.

Continue reading about Martyrs of Japan