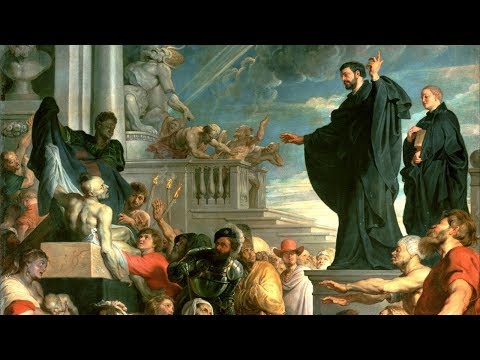 St. Francis Xavier was a Navarrese-Basque Roman Catholic missionary born in the Kingdom of Navarre on April 7, 1506. His father was a privy counselor and finance minister to King John III of Navarre. He was the youngest in his family and resided in a castle which still partially stands today and is in the possession of the Jesuit order.

As the young Francis grew, he was surrounded by war. Navarre was the target of a campaign by King Ferdinand of Aragon and Castile, and the kingdom was eventually conquered.

When the war stopped and Francis came of age, he was sent to study at the University of Paris. While there he roomed with his friend, Peter Favre. The pair met and were heavily influenced by Ignatius of Loyola, who encouraged Francis to become a priest.

In 1530, Francis Xavier earned his master's degree, and went on to teach philosophy at the University of Paris.

On August 15, 1534, Francis Xavier along with Peter Favre, and several other friends, made vows of poverty, chastity, and obedience. The men planned to travel to the Holy Land to convert non-believers. Francis Xavier started his study of theology that same year and was ordained on June 24, 1537.

Pope Paul III approved the formation of their order in 1540, which became The Society of Jesus. The order is more popularly became known as the Jesuits.

While Francis Xavier was becoming a priest, Portugal was colonizing India. The Portuguese settlers in India and elsewhere were losing their faith and Christian values. To restore these values, the King of Portugal asked the Pope to send missionaries to the region.

Pope Paul III asked the new order to take the mission, particularly since they could not undertake their preferred mission to the Holy Land due to warfare there. Ignatius ultimately decided to send Francis.

Francis Xavier left for India in 1541, on his thirty-fifth birthday. As he departed he was informed that the pope appointed him to be the Papal Nuncio in the East. A Papal Nuncio is a diplomat who takes up permanent residence in another country to formally represent the Church there. He arrived in the region and colony of Goa, India on May 6, 1542.

Although Goa had churches and even a bishop in the Portuguese colony, there were few people to preach and minister to the Portuguese, especially outside the walls of the city.

A major problem Francis quickly recognized was the nature of the people and their intentions. Many sailors and settlers were former prisoners who had been recruited from Portuguese jails or were fleeing mistakes they made back home. None of them came to spread or live virtuous lives. Instead they came to escape Portugal, find adventure, or to make fortunes. Still, they settled and made families.

Xavier ministered first to the sick and the children. Then he learned about the native people of the Pearl Fishery Coast, which had been baptized a decade earlier, but were never taught their faith. Xavier began ministering to them. He spent three years among them, but was often embarrassed by the conduct of his Portuguese countrymen who were already Catholic, but frequently misbehaved.

Xavier built 40 churches for the people of the Pearl Fishery Coast. Xavier encountered difficulty in his mission because he usually worked to convert the people first, instead of their leaders.

Xavier eventually decided to travel to Malacca and the Maluku Islands to evangelize the people there. He spent about two years in the region, and while in Malacca, a Japanese man named Anjiro caught up with him. Anjiro was accused of murder in Japan but had managed to flee. Learning about Xavier, he decided to find Xavier and tell him about Japan, which he did. Xavier converted Anjiro to Christianity, making him the first Japanese convert to Christianity.

Xavier returned to Goa for about a year to attend to his official responsibilities, but he was very interested in visiting Japan. In 1549, he finally departed for the country, arriving in July of that year.

The local daimyo warmly received Xavier, but forbade his subjects from converting to Christianity. In addition to the legal obstacle, Xavier found language to be a barrier. The Japanese language was different than any other he had previously encountered.

Xavier was surprised to find that his poverty was a barrier to his communication. Poverty was not respected in feudal Japan as it was in Europe, so Xavier was compelled to change his strategy. On one occasion, when meeting with a local prince, Xavier arranged to be finely dressed and for his fellow missionaries to wait on him. He had gifts from India delivered to him. The charade had the desired effect and improved his reputation.

Despite his efforts, the Japanese were not easily converted. Most held fast to their traditional Buddhist or Shinto beliefs. The Japanese also found the concept of hell as a place of eternal torment to be difficult to accept.

Some traditionalists, including priests from the native religions, grew hostile toward Xavier and Christianity. Xavier established a few congregations, but the religion was suppressed from spreading by the nobility to grew to mistrust the outsiders and their faith. Eventually, Christianity became the subject of great persecution, forcing many to go underground with their belief.

Xavier finished his work in Japan for the time and decided to return to India with a stop in Goa. During his voyage, he was petitioned to meet with the Chinese emperor and argue for the release of several Portuguese prisoners as a representative of their government. Xavier decided to make the trip to China, but first felt the need to return to his headquarters in Goa.

He departed India for the last time in April, 1552 and stopped in Malacca to obtain official documents attesting to his status as a representative of the Portuguese king. However, the harbor in Malacca was now controlled by Alvaro da Gama, the Captain of Malaca and the son of Vasco da Gama.

Da Gama was not friendly to Xavier who refused to recognize his official status as Papal Nuncio. He confiscated the gifts Xavier intended for the Chinese emperor and staffed his ship with a new crew, loyal to himself.

Xavier's ship reached China in August, stopping at an island off the Chinese coast. From there, Xavier was on his own. He managed to find a man to agree to take him to China for a large fee, but while he was waiting for his boat to arrive became ill with a fever. Xavier died on December 3, 1552.

Xavier was buried on the island until February 1553 when his body was removed and taken to Malacca where it was buried at a church for a month. Then one of Xavier?s companions moved his body to his own residence for the rest of the year. In December, his body was moved to Goa. Xavier remains buried in a silver casket enclosed in a glass case.

Several of his bones have been removed. His right arm, used to bless converts, is on display in Rome. Another arm bone is kept on Coloane island, in Macau, which today is part of China.

Xavier was beatified by Pope Paul V on Oct. 25, 1619, and canonized by Gregory XV on March 12, 1622 at the same ceremony as Ignatius of Loyola. He is the patron of Catholic missions and his feast day is on December 3. 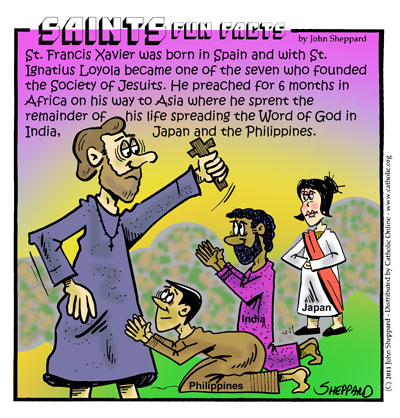