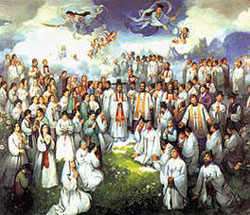 The men and women who were slain because they refused to deny Christ in the nation of Korea. The faith was brought to Korea in a unique fashion. The intellectuals of that land, eager to learn about the world, discovered some Christian books procured through Korea's embassy to the Chinese capital. One Korean, Ni-seung-houn, went to Beijing in 1784 to study Catholicism and was baptized Peter Ri. Returning to Korea, he converted many others. In 1791, when these Christians were suddenly viewed as foreign traitors, two of Peter Ri's converts were martyred, men named Paul Youn and Jacques Kuen. The faith endured, however, and when Father James Tsiou, a Chinese, entered Korea three years later, he was greeted by four thousand Catholics. Father Tsiou worked in Korea until 1801 when he was slain by authorities. Three decades later the Prefecture Apostolic of Korea was established by Pope Leo XII, after he received a letter smuggled out of Korea by faithful Catholics. In 1836, Monsignor Lawrence Imbert managed to enter Korea. Others arrived, and they worked until 1839, when a full persecution started, bringing about the martyrdom of the European priests. Young Korean candidates for the priesthood were sent to Macau for ordination. The first native priest, Andrew Kim Taegon, returned to Korea in 1845 and was martyred the following year. Severe persecution followed, and Catholics fled to the mountains, still spreading the faith. In 1864, a new persecution claimed the lives of two bishops, six French missionaries, another Korean priest, and eight thousand Korean Catholics. The Korean martyrs of 1839, 1846, and 1867 were canonized in Korea in 1984 by Pope John Paul II.

Continue reading about Martyrs of Korea