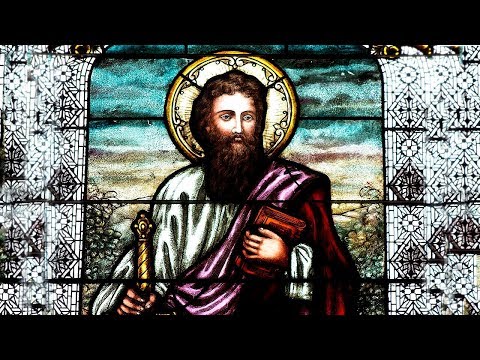 Saint Paul is one of the most important and influential of all the saints. Many of his writings are contained in the Canon of the Bible and have influenced the growth and development of the Church since the first century.

St. Paul was originally known as Saul, and he was a Roman citizen and a Pharisee. He even presided over the persecutions of the early Christians and was present at the martyrdom of St. Stephen.

However, Saul experienced a powerful vision that caused him to convert to Christianity while on the road to Damascus. He was duly baptized and took the name Paul.

Paul traveled the world, first to Arabia then back to Damascus. He also visited Jerusalem to see St. Peter, the first pope and pay homage to him. During these travels, he preached ceaselessly, often drawing criticism and ire from those who rebuffed his message. Jews, in particular, hated his preaching as they saw him convert people to Christianity from Judaism.

Eventually, Paul returned to Tarsus, where he was born. He preached there until he was called by Barnabus to come to Antioch. After a year spent in Antioch, a famine occurred in Jerusalem and the pair was dispatched to the city with alms.

The accomplished this mission, and returned to Antioch.

Paul and Barnabus then went forth on a mission to Cypress and throughout Asia Minor. They established several churches in their travels. After establishing his churches, Paul remained in communication with the faithful, often writing letters to answer questions and resolve disputes.

The letters that have survived have become part of the Bible. It is believed that Paul wrote other letters, which were lost even before the Bible was established by the Church. Paul's writings are important because they provide good advice for how Christians should live.

Paul traveled throughout much of Europe, particularly in Macedonia, Greece, and Italy. While preparing for a missionary trip to Spain, he was imprisoned in Caesarea by the Jews for two years. He traveled again, was shipwrecked in Malta, and was imprisoned for another two years for preaching in Rome. Despite these imprisonments, Paul continued to preach.

Paul eventually made his way to Spain, then returned to the East, and finally returned to Rome once again. In 67 AD, Paul was arrested in Rome for a second time and this time he was beheaded under the insane Emperor Nero. According to John Chrysostom, Nero knew Paul personally.

Paul is among the most famous, intelligent and influential of the apostles. There are some who argue that he was the leader of the apostles, but this is not supported by the evidence. Instead, he likely preached at the request of St. Peter, who was pope.

St. Paul is the patron saint of missionaries, evangelists, writers, journalists, authors, public workers, rope and saddle makers, and tent makers. His feast day is on June 29 when he is honored with Saint Peter, although he is also honored on other days throughout the year, January 25, for his conversion, February 16, for his shipwreck, and Nov. 18 for the dedication of his Basilica. 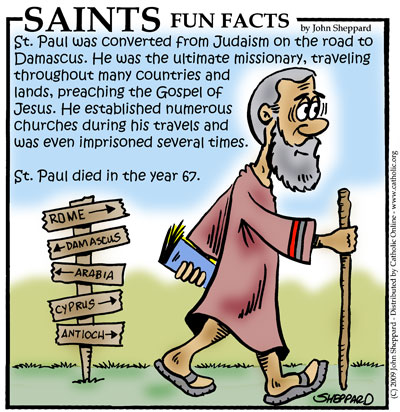