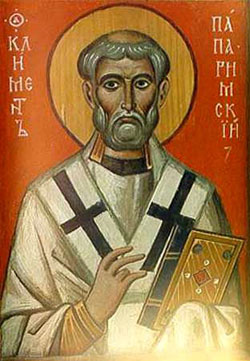 Little is known of this apostolic father beyond a few facts. He was a disciple of S. Peter, and perhaps of S. Paul. It is thought that the Clement whom S. Paul praises as a faithful fellow- worker, whose name is written in the Book of Life [Philippians 4:3], was Clement, afterwards bishop of Rome. But there is great difficulty in admitting this supposition. It is certain that Clement, the idol of the Petrine party in the Primitive Church, about whom their myths and traditions circled lovingly, was quite removed in feeling from the Pauline party.

According to Tertullian, Clement succeeded S. Peter immediately in the episcopal government of the Church at Rome. But in the list of bishops given us by Irenaeus and Eusebius he occupies the third place after the apostle, that is, after Linus and Cletus (Anacletus). It is, however, probable that the Church at Rome had at first two successions, one Petrine, the other Pauline, but that they speedily merged into one; and this will account for the confusion in the lists of the first bishops of Rome. Clement probably was Petrine, and Cletus Pauline bishop, the former ruling the converted Jews, the latter the Gentile converts. We know nothing of the events of his pontificate, except that there was a schism at Corinth, which drew forth a letter from him which is preserved. S. Jerome and S. Irenaeus do not say that he died a martyr's death, but Rufinus and Zosimus give him the title of martyr; but this title by no means implies that he had died for the faith; it had anciently more extended signification than at present, and included all who had witnessed a good confession, and suffered in any way for their faith.

This is all that we know of S. Clement. But imagination has spun a web of romance about his person.

The Clementine Recognitions and Homilies are an early romance representing the disputation of S. Peter and Simon Magus; they have a story running through them to hold the long disquisitions together, of which S. Clement is the hero. It is, however, pure romance, with, perhaps, only this basis of truth in it, that Clement is represented as the devoted adherent and disciple of S. Peter. The Clementines are thoroughly anti-Pauline, as are also the Apostolic Constitutions, in which again S. Clement appears prominently.

The legend of the martyrdom of S. Clement relates that, in the reign of Trajan, when Mamertinus was prefect of the city, and Toractianus count of the offices, a sedition arose among the rabble of Rome against the Christians, and especially against Clement, bishop of Rome. Mamertinus interfered to put down the riot, and having arrested Clement, sent him to the emperor, who ordered his banishment to Pontus, where he was condemned to work in the marble quarries. He found many Christians among his fellow-convicts, and comforted and encouraged them. The only spring of drinking water was six miles off, and it was a great hardship to the convicts to have to fetch it all from such a distance. One day Clement saw a lamb scraping at the soil with one of its forefeet. He took it as a sign that water was there; dug, and found a spring.

As Clement succeeded in converting many pagans, he was sent to Aufidianus, the prefect, who ordered him to be drowned in the sea with an old anchor attached to his neck. His body was recovered by his disciple Phoebus. The relics of S. Clement were translated to Constantinople (860) by S. Cyril on his return from his mission to the Chazars, whilst engaged in the Chersonese on his Sclavonic translation of the Gospels. Some of the relics found their way to Rome, and were deposited in the church of San Clemente, where they are still reverently preserved. These consist of bones, some reddened earth, a broken vase containing some red matter, a little bottle similarly filled, and an inscription stating that these are the relics of the Holy Forty Martyrs of Scilita, and also of Flavius Clement.

In art S. Clement of Rome is represented as a Pope with an anchor at his side. [His death is placed at about 100 A.D.]

From The Lives of the Saints by the Rev. S. Baring-Gould, M.A., published in 1914 in Edinburgh.