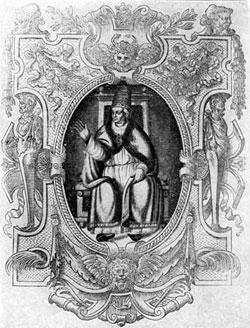 Clement II Suidger of Bamberg was born in Saxony and was chaplain to Emperor Henry III when Henry ousted various rival claimants to the papal throne, Benedict IX, Sylvester III, and Gregory VI in 1046. Henry arranged for Suidger's election on Christmas Eve and for his consecration on Christmas Day. In return, Clement, who named himself after Clement I, crowned Henry Holy Roman Emperor. Clement called a synod in 1047 to condemn simony and to establish a penance for being knowingly ordained by a simoniac bishop. Clement travelled extensively with Henry during his ten-month papacy and died, probably of lead poisoning, at the monastery of St. Thomas near Pesaro. His body was taken to Bamberg for burial.