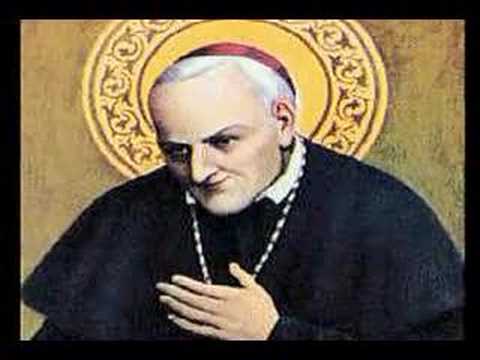 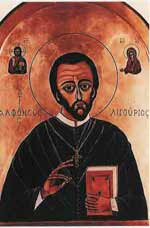 Bishop, Doctor of the Church, and the founder of the Redemptorist Congregation. He was born Alphonsus Marie Antony John Cosmos Damien Michael Gaspard de Liguori on September 27,1696, at Marianella, near Naples, Italy. Raised in a pious home, Alphonsus went on retreats with his father, Don Joseph, who was a naval officer and a captain of the Royal Galleys. Alphonsus was the oldest of seven children, raised by a devout mother of Spanish descent. Educated at the University of Naples, Alphonsus received his doctorate at the age of sixteen. By age nineteen he was practicing law, but he saw the transitory nature of the secular world, and after a brief time, retreated from the law courts and his fame. Visiting the local Hospital for Incurables on August 28, 1723, he had a vision and was told to consecrate his life solely to God. In response, Alphonsus dedicated himself to the religious life, even while suffering persecution from his family. He finally agreed to become a priest but to live at home as a member of a group of secular missionaries. He was ordained on December 21, 1726, and he spent six years giving missions throughout Naples. In April 1729, Alphonsus went to live at the "Chiflese College," founded in Naples by Father Matthew Ripa, the Apostle of China. There he met Bishop Thomas Falcoia, founder of the Congregation of Pious Workers. This lifelong friendship aided Alphonsus, as did his association with a mystic, Sister Mary Celeste. With their aid, Aiphonsus founded the Congregation of the Most Holy Redeemer on November 9, 1732. The foundation faced immediate problems, and after just one year, Alphonsus found himself with only one lay brother, his other companions having left to form their own religious group. He started again, recruited new members, and in 1743 became the prior of two new congregations, one for men and one for women. Pope Benedict XIV gave his approval for the men's congregation in 1749 and for the women's in 1750. Alphonsus was preaching missions in the rural areas and writing. He refused to become the bishop of Palermo but in 1762 had to accept the papal command to accept the see of St. Agatha of the Goths near Naples. Here he discovered more than thirty thousand uninstructed men and women and four hundred indifferent priests. For thirteen years Alphonsus fed the poor, instructed families, reorganized the seminary and religious houses, taught theology, and wrote. His austerities were rigorous, and he suffered daily the pain from rheumatism that was beginning to deform his body. He spent several years having to drink from tubes because his head was so bent forward. An attack of rheumatic fever, from May 1768 to June 1769, left him paralyzed. He was not allowed to resign his see, however, until 1775. In 1780, Alphonsus was tricked into signing a submission for royal approval of his congregation. This submission altered the original rule, and as a result Alphonsus was denied any authority among the Redemptorists. Deposed and excluded from his own congregation, Alphonsus suffered great anguish. But he overcame his depression, and he experienced visions, performed miracles, and gave prophecies. He died peacefully on August 1,1787, at Nocera di Pagani, near Naples as the Angelus was ringing. He was beatified in 1816 and canonized in 1839. In 1871, Alphonsus was declared a Doctor of the Church by Pope Pius IX. His writings on moral, theological, and ascetic matters had great impact and have survived through the years, especially his Moral Theology and his Glories of Mary. He was buried at the monastery of the Pagani near Naples. Shrines were built there and at St. Agatha of the Goths. He is the patron of confessors, moral theologians, and the lay apostolate. In liturgical art he is depicted as bent over with rheumatism or as a young priest.