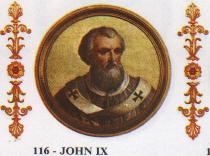 John IX Pope from 898-900, John IX was a Benedictine, whose election was opposed by Sergius, a cardinal who later became Pope Sergius III. Having excommunicated his foe, John called a synod to rehabilitate Pope Formosus and to forbid trials of the dead. John confirmed the Constitutio Romana, which required imperial approval of all papal elections.