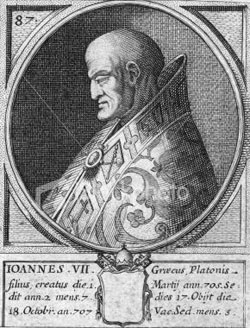 John VII Very probably a Greek, John VII was elected to the papacy in 705 and built a papal home at the foot of the Palatine Hill, then in the Greek quarter of Rome. A restorer of churches, John also rebuilt the monastery of Mt. Sabiaco after the Saracens had raided it. He negotiated with the Lombards for the return of papal lands in the Alps. Asked to approve the canons of the Quintisext Council, he returned them to the emperor without accepting or condemning them. John died after a reign of two years.