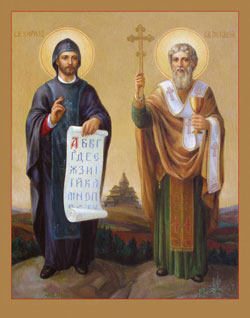 Cyril and Methodius must have often wondered, as we do today, how God could bring spiritual meaning out of worldly concerns. Every mission they went on, every struggle they fought was a result of political battles, not spiritual, and yet the political battles are forgotten and their work lives on in the Slavic peoples and their literature.

Tradition tells us that the brothers Methodius and Constantine (he did not take the name Cyril until just before his death) grew up in Thessalonica as sons of a prominent Christian family. Because many Slavic people settled in Thessalonica, it is assumed Constantine and Methodius were familiar with the Slavic language. Methodius, the older of the two brothers, became an important civil official who would have needed to know Slavonic. He grew tired of worldly affairs and retired to a monastery. Constantine became a scholar and a professor known as "the Philosopher" in Constantinople. In 860 Constantine and Methodius went as missionaries to what is today the Ukraine.

When the Byzantine emperor decided to honor a request for missionaries by the Moravian prince Rastislav, Methodius and Constantine were the natural choices; they knew the language, they were able administrators, and had already proven themselves successful missionaries.

But there was far more behind this request and the response than a desire for Christianity. Rastislav, like the rest of the Slav princes, was struggling for independence from German influence and invasion. Christian missionaries from the East, to replace missionaries from Germany, would help Rastislav consolidate power in his own country, especially if they spoke the Slavonic language.

Constantine and Methodius were dedicated to the ideal of expression in a people's native language. Throughout their lives they would battle against those who saw value only in Greek or Latin. Before they even left on their mission, tradition says, Constantine constructed a script for Slavonic -- a script that is known today as glagolithic. Glagolithic is considered by some as the precursor of cyrillic which named after him.

Arriving in 863 in Moravia, Constantine began translating the liturgy into Slavonic. In the East, it was a normal procedure to translate liturgy into the vernacular. As we know, in the West the custom was to use Greek and later Latin, until Vatican II. The German hierarchy, which had power over Moravia, used this difference to combat the brothers' influence. The German priests didn't like losing their control and knew that language has a great deal to do with independence.

So when Constantine and Methodius went to Rome to have the Slav priesthood candidates ordained (neither was a bishop at the time), they had to face the criticism the Germans had leveled against them. But if the Germans had motives that differed from spiritual concerns, so did the pope. He was concerned about the Eastern church gaining too much influence in the Slavic provinces. Helping Constantine and Methodius would give the Roman Catholic church more power in the area. So after speaking the brothers, the pope approved the use of Slavonic in services and ordained their pupils.

Constantine never returned to Moravia. He died in Rome after assuming the monastic robes and the name Cyril on February 14, 869. Legend tells us that his older brother was so griefstricken, and perhaps upset by the political turmoil, that he intended to withdraw to a monastery in Constantinople. Cyril's dying wish, however, was that Methodius return to the missionary work they had begun.

He couldn't return to Moravia because of political problems there, but another Slavic prince, Kocel, asked for him, having admired the brothers' work in translating so much text into Slavonic. Methodius was allowed by the pope to continue saying Mass and administering baptism in the Slavonic tongue. Methodius was finally consecrated bishop, once again because of politics -- Kocel knew that having a Slavonic bishop would destroy the power of the Salzburg hierarchy over his land. Methodius became bishop of Sirmium, an ancient see near Belgrade and given power over Serbo-Croatian, Slovene, and Moravian territory.

The German bishops accused him of infringing on their power and imprisoned him in a monastery. This lasted until Germany suffered military defeats in Moravia. At that time the pope intervened and Methodius returned to his diocese in triumph at the same time the Germans were forced to recognize Moravian independence. There was a loss involved -- to appease the Germans a little, the pope told Methodius he could no longer celebrate liturgy in the vernacular.

In 879 Methodius was summoned to Rome to answer German charges he had not obeyed this restriction. This worked against the Germans because it gave Methodius a chance to explain how important it was to celebrate the liturgy in the tongue people understood. Instead of condemning him, the pope gave him permission to use Slavonic in the Mass, in Scripture reading, and in the office. He also made him head of the hierarchy in Moravia.

The criticism never went away, but it never stopped Methodius either. It is said that he translated almost all the Bible and the works of the Fathers of the Church into Slavonic before he died on April 6 in 884.

Within twenty years after his death, it would seem like all the work of Cyril and Methodius was destroyed. Magyar invasions devastated Moravia. And without the brothers to explain their position, use of the vernacular in liturgy was banned. But politics could never prevail over God's will. The disciples of Cyril and Methodius who were driven out of Moravia didn't hide in a locked room. The invasion and the ban gave them a chance to go to other Slavic countries. The brothers' work of spreading Christ's word and translating it into Slavonic continued and laid the foundation for Christianity in the region.

What began as a request guided by political concerns produced two of the greatest Christian missionaries, revered by both Roman Catholic and Eastern Orthodox churches, and two of the fathers of Slavonic literary culture.

Cyril and Methodius believed in the importance of celebrating liturgy in our own language, a privilege we have only had in last twenty years. If this change took place before your time, ask older Catholics about the differences that have taken place in their worship because of this change. If you were worshipping during the change, reflect on how celebrating in the vernacular has helped your worship and your spiritual life.

Saints Cyril and Methodius, watch over all missionaries but especially those in Slavic countries. Help those that are in danger in the troubled areas. Watch over the people you dedicated your lives to. Amen