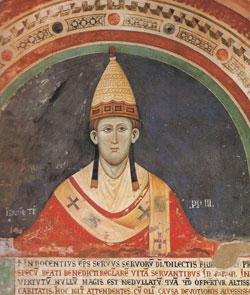 Innocent III Innocent III (c 1160-1216 CE) was born into a Roman family as Lothair of Segni. He attended school in Paris and Bologna where he studied theology and law respectively. He became Cardinal Deacon of St. Sergius and St. Bacchus in 1190, and in January of 1198 was elected Pope. He was ordained in February and came to office as Fredrick II of Sicily, Otto of Brunswick, and Philip of Hohenstaufen were vying for leadership of the Holy Roman Empire. Innocent used this struggle to strengthen the role of papal intervention in political decisions. He believed in a system of papal monarchy in which the Pope acted as the Vicar of Jesus Christ and in which bishops were under his direct authority. Innocent's two main interests were heresy and crusade. He declared the church a state in order to make heresy a crime against the state and called crusades with the goal of reuniting the Greek and Latin churches. In 1215 Innocent III held the most widely attended council of the Middle Ages, the Fourth Lateran Council, which dealt with over 70 decrees written by Innocent III himself.