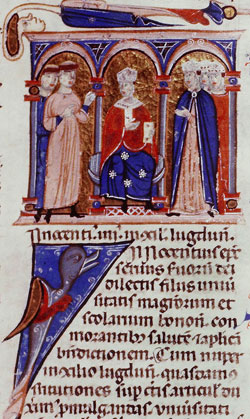 Innocent IV Sinibaldo Fieschi was a canon lawyer, a vice-chancellor of the Roman church, and cardinal priest of St. Lawrence in Lucina before his election to the papacy in 1243. The hallmark of his reign was conflict between the pope and the Holy Roman Emperor. Excommunicated by Gregory IX, Frederick II sought reconciliation with Innocent. Talks broke down over the control of Lombardy. In 1244, Frederick marched to Rome to imprison the pope, who fled to Lyons, where he called a council that deposed Frederick amd created Henry Raspe anti-king. Other concerns addressed by the council were the liberation of the Holy Sepulchre and the threat of Mongol invasion. King/St. Louis IX, who attempted to mediate peace between Innocent and Frederick, undertook the Sixth Crusade that same year. The following year, Innocent sent missionaries to convert the Mongols. Frederick died, still excommunicated, in 1250. Beloved of the Roman people but hated by the heirs of Frederick, Innocent returned to Rome three years later. He died in December, 1254, and his epitaph declares the victory of the pope over the dragon, Frederick, the enemy of Christ.