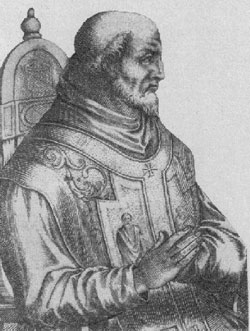 Innocent II Born Gregorio Papareschi in Rome, Innocent II was elected pope in 1130 by a minority of cardinals. The majority elected Anacletus. Both were consecrated on the same day. Innocent fled to France and sought the protection and support of King Lothair, who invaded Italy two years later and reinstated Innocent, who crowned Lothair Holy Roman Emperor in 1133. When Lothair left Rome for Germany later that year, Innocent went to Pisa. In 1138, St. Bernard of Clairvaux persuaded Anacletus' successor to resign, and a council held at the Lateran in the following year ended the schism. Innocent supported the Council of Sens (1140), which condemned Peter Abelard and Arnold of Brescia. A year later, Innocent placed France (and any other place that might shelter Louis VII) under interdict. Innocent died in 1143, the year that Romans set up an independent communard government.