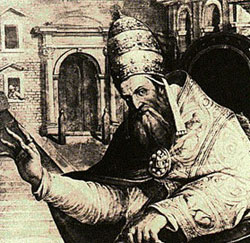 Pope Gregory XI Born Pierre Roger de Beaufort in 1329, Pope Gregory XI was the last Frenchman elected to the papacy and was the first pope to reside in Rome after popes had ruled from Avignon for 68 years. He began his career early: at 11, he was made canon of Rodez and Paris, and at 19, he was made a cardinal deacon by his uncle, Pope Clement VI. Gregory was ordained a priest after his election to the papal throne in 1370. Both St. Bridget of Sweden and St. Catherine of Siena urged Gregory to return to Rome. He entered the city in January of 1377, but he left again after a massacre led by his legate, Robert of Geneva (later Antipope Clement VII), at Cesena a month later. Gregory died of exhaustion in March, 1378.