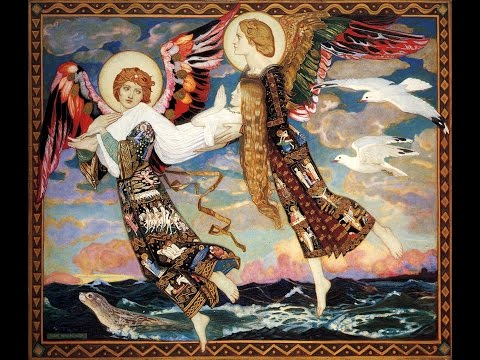 Saint Brigid was born Brigit, and shares a name with a Celtic goddess from whom many legends and folk customs are associated.

There is much debate over her birthparents, but it is widely believed her mother was Brocca, a Christian baptized by Saint Patrick, and her father was Dubthach, a Leinster chieftain. Brocca was a slave, therefore Brigid was born into slavery.

When Dubthach's wife discovered Brocca was pregnant, she was sold to a Druid landowner. It is not clear if Brocca was unable to produce milk or was not present to care for Brigid, but legend states Brigid vomited any food the druid attempted to feed her, as he was impure, so a white cow with red ears sustained her instead.

Many stories of Brigid's purity followed her childhood. She was unable to keep from feeding the poor and healing them.

One story says Brigid once gave her mother's entire store of butter, that was later replenished after Brigid prayed.

When she was about ten-years-old, Brigid was returned to her father's home, as he was her legal master. Her charity did not end when she left her mother, and she donated his possessions to anyone who asked.

Eventually, Dubthach became tired of her charitably nature and took her to the king of Leinster, with the intention of selling her. As he spoke to the king, Brigid gave his jeweled sword to a beggar so he could barter it for food for his family. When the king, who was a Christian, saw this, he recognized her heart and convinced Dubthach to grant her freedom by saying, "Her merit before God is greater than ours."

After being freed, Brigid returned to the Druid and her mother, who was in charge of the Druid's dairy. Brigid took over and often gave away milk, but the dairy prospered despite the charitable practice, and the Druid eventually freed Brocca.

Brigid then returned to Dubthach, who had arranged for her to marry a bard. She refused and made a vow to always be chaste.

Legend has it Brigid prayed that her beauty be taken so no one would want to marry her, and the prayer was granted. It was not until after she made her final vows that her beauty was restored.

Another tale says that when Saint Patrick heard her final vows, he accidentally used the form for ordaining priests. When the error was brought to his attention, he simply replied, "So be it, my son, she is destined for great things."

Little is known about Saint Brigid's life after she entered the Church, but in 40 she founded a monastery in Kildare, called the Church of the Oak. It was built above a pagan shrine to the Celtic goddess Brigid, which was beneath a large oak tree.

Brigid and seven friends organized communal consecrated religious life for women in Ireland and she founded two monastic institutions, one for men and one for women. Brigid invited a hermit called Conleth to help her in Kildare as a spiritual pastor.

Her biographer reported that Brigid chose Saint Conleth "to govern the church along with herself."

She later founded a school of art that included metalwork and illumination, which Conleth led as well. It was at this school that the Book of Kildare, which the Gerald of Wales praised as "the work of angelic, and not human skill," was beautifully illuminated, but was lost three centuries ago.

There is evidence that Brigid was a good friend of Saint Patrick's and that the Trias Thaumaturga claimed, "Between St. Patrick and Brigid, the pillars of the Irish people, there was so great a friendship of charity that they had but one heart and one mind. Through him and through her Christ performed many great works."

Saint Brigid helped many people in her lifetime, but on February 1 525, she passed away of natural causes. Her body was initially kept to the right of the high altar of Kildare Cathedral, with a tomb "adorned with gems and precious stones and crowns of gold and silver," but in 878, during the Scandinavian raids, her relics were moved to the tomb of Patrick and Columba.

In 1185, John de Courcy had her remains relocated in Down Cathedral. Today, Saint Brigid's skull can be found in the Church of St. John the Baptist in Lumiar, Portugal. The tomb in which it is kept bears the inscription, "Here in these three tombs lie the three Irish knights who brought the head of St. Brigid, Virgin, a native of Ireland, whose relic is preserved in this chapel. In memory of which, the officials of the Altar of the same Saint caused this to be done in January AD 1283."

A portion of the skull was relocated to St. Bridget's Church and another was sent to the Bishop of Lisbon in St. Brigid's church in Killester.

Saint Brigid's likeness is often depicted holding a reed cross, a crozier, or a lamp.

Brigid of the Mantle, encompass us,
Lady of the Lambs, protect us,
Keeper of the Hearth, kindle us.
Beneath your mantle, gather us,
And restore us to memory.
Mothers of our mother, Foremothers strong.
Guide our hands in yours,
Remind us how to kindle the hearth.
To keep it bright, to preserve the flame.
Your hands upon ours, Our hands within yours,
To kindle the light, Both day and night.
The Mantle of Brigid about us,
The Memory of Brigid within us,
The Protection of Brigid keeping us
From harm, from ignorance, from heartlessness.
This day and night,
From dawn till dark, From dark till dawn.