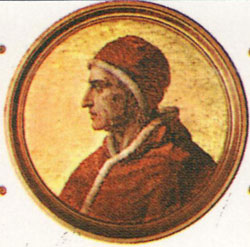 Gregory XII The last pope of the Western Schism, Angelo Correr was born in Venice c. 1325. Before his election to the throne of Peter as Gregory XII, he was the Latin Patriarch of Constantinople, a papal secretary, and the cardinal priest of San Marco. As a cardinal, he agreed before the election to resign if Antipope Benedict XIII also resigned or if the antipope died. He agreed to resign if the antipope negotiated the end of the schism. As the pope, he cancelled the meeting to resolve the schism and refused to step down after the Council of Pisa in 1409, which deposed both the Roman and Avignonese popes. In 1415, after the Council of Constance had deposed him, Gregory did resign and ended his days in 1417 as the cardinal bishop of Porto.