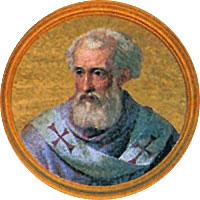 Gelasius II Born in the kingdom of Naples, John of Gaeta entered Monte Cassino c. 1060 and became a cardinal in 1088. Urban II appointed him chancellor the following year, a post he held until his election to the papal throne in 1118. Shortly after being elected, Gelasius was attacked by Cencius III Frangipani and imprisoned. Unrest among the Romans caused Frangipani to release the pope, who fled to Gaeta when he heard that Henry V was on his way to Rome. When Gelasius refused to return and negotiate, Henry set up antipope Gregory VIII. Gelasius excommunicated emperor and antipope. Frangipani again attacked Gelasius when he tried to enter Rome in July of 1118. The pope fled to France, where he died early the following year at Cluny of pleurisy.