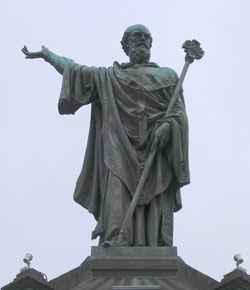 Odo of Lagery (or Chatillan) was elected pope in 1088 and took the name Urban II. He studied under St. Bruno, the founder of the Carthusians, and was a monk at Cluny before his appointment to the see of Ostia in 1078. At the time of Urban's election to the papacy, Antipope Clement III controlled Rome, and Urban did not reside there until 1093. He took strong positions on clerical celibacy and against simony. He argued that kings could not appoint bishops and abbots but could invest them if the church had canonically appointed them. Urban supported the Christian conquest of Spain from the Moors, and at the council of Claremont in 1095, he declared the Truce of God and preached the first crusade. Urban died in 1099; although he died two weeks after the Crusaders conquered Jerusalem, he did not live to hear the news.