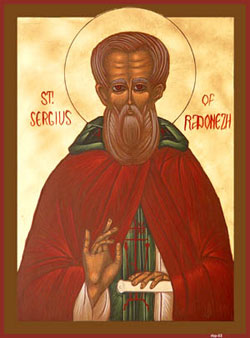 Born Barfolomei Kirillovich in 1314, St. Sergius of Radonezh came from a once-wealthy family and lived with his parents until their deaths in 1334. He was tonsured a monk three years later and was ordained a priest. In 1340, he established the monastery of the Holy Trinity, one of forty which he founded. He created several monastery schools and taught farmers better methods of farming. He refused the patriarchate of Moscow in 1378. Two years later, he urged Prince/St. Dimitri Donskoi to fight the Tatars, whom Donskoi defeated at Kulikovo. Sergius died in 1392.