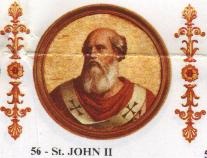 John II Born Mercurius, John II was the first pope to change his name. Feeling that his birth name was too pagan, Mercurius named himself after John I when he was elected to the see of Rome in 533. John excommunicated the Acoemeti, a group of Nestorian monks in Rome; his correspondence with Justinian about the matter in included in the Code of Justinian. The pope also corresponded with Caesarius of Arles about a bishop accused of wrong-doing. John died in 535 and is buried at St. Peter's.