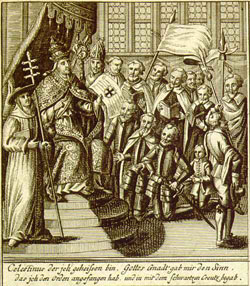 Celestine III A student of Peter Abelard, Giancinto Bobone was born c. 1106 in Rome and served as a cardinal deacon for 47 years before his election to the papacy in 1191. He took the name Celestine in honor of Pope/St. Celestine I. Thomas ŕ Becket considered Cardinal Bobone totally trustworthy, a trait he and many others considered rare for a cardinal. Prior to his election, Bobone had been a papal legate to Germany and Spain; he defended his teacher at the Council of Sens in 1121. As pope, Celestine blessed the Knights Templar, the Knights Hospitaller, and the Teutonic Knights. Celestine crowned Henry VI Holy Roman Emperor in the year of his own election to the papacy and did not excommunicate the emperor when Henry failed to return all the territory he had taken from the papal states and when he kidnapped Richard the Lion-Hearted of England. Celestine died in 1198.