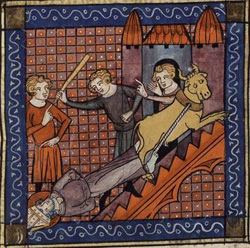 Celestine II Born into a noble Umbrian family, Guido of Cittŕ di Castelo served as cardinal deacon and cardinal priest, as well as papal legate to Germany and France, before his election to the papacy in 1143 as Celestine II. In his brief reign, he ended the interdict imposed on King Louis VII and refused to recognize Roger II as king of Sicily. Celestine admired Peter Abelard and like being called "master." Generous to the town of his boyhood, he gave 56 volumes to the library of the church of San Florido. The silver altarpiece he presented to the church is another munificence. Celestine died the year following his election.