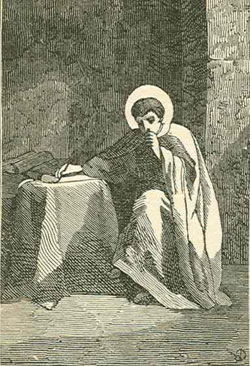 Called "the best disciple of Augustine," St. Prosper of Aquitaine (c. 370-c. 463/465) devoted his life to defending Augustine's doctrines of grace and predestination against those who opposed it. Prosper may have been born at Limoges; he may have been married. By 428, he was a layman living with monks at Marseilles, who disagreed with Augustine's theology of grace and predestination. To strengthen his arguments, Prosper wrote to Augustine, who responded with letters that are now known as "On the Predestination of the Saints" and "On the Gift of Perserverance." Prosper seems to have labelled anyone who disagrees with Augustine "semi-Pelagian," and the list includes John Cassian, Hilary of Arles, and Vincent of Lérins. In 431, the year after Augustine's death, Proper and a friend named Hilary travelled to Rome to ask Celestine I, who had praised Augustine, to proclaim the truth of his teachings. Prosper later became secretary to Leo the Great, whom he aided in the pope's correspondence against the Nestorians. Prosper wrote theological poems and authored a chronicle of world history that incoroporated the histories of Jerome, Sulpicius Severus, and Orosius. Prosper's history ends with the Vandal sack of Rome (455). The work is now a valuable source for the theological history of the V Century. Cassiodorus and Paul the Deacon edited and rewrote Prosper's work. Prosper's selections from the writings of Augustine were the basis of the decrees of the 529 Council of Orange.