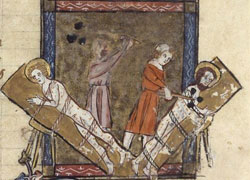 Second century martyr. Son of Saint Vitalis of Milan and Saint Valeria of Milan. He and his twin brother Gervase are considered the first martyrs of Milan as Saint Ambrose, guided by a vision, unearthed their remains in 386. Saint Paulinus of Nola says the martyrs appeared to Saint Ambrose in an apparition. Even when the relics were discovered, nothing was remembered about them except their names and that they were martyrs in an early persecution, perhaps under Nero.