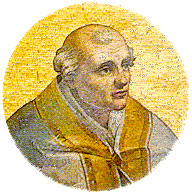 Callistus II Born Guido of Burgandy c. 1050, Callistus II signed and promulgated the Concordat of Worms in 1122, which settled the long-standing dispute over lay investiture to the satisfaction of pope and kings. (The pope appoints bishops, and the emperor confirms the appointments.) Elected in 1119, Callistus had excommunicated Holy Roman Emperor Henry V over the issue and driven the emperor's antipope out of Rome. Callistus offered protection to the Jews in Rome and confirmed indulgences for Crusaders. He protected pilgrims and set up punishments for those who broke the Truce of God. He died in 1124.