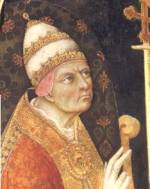 Callistus III The son of a small landholder, Alfonso de Borja y Borja was born in 1378 in Jativa. He studied and taught at Lérida before becoming private secretary to King Alfonso V in 1416. Appointed a cardinal in 1444, Borja was elected pope eleven years later, a compromise candidate. He took the name Callixtus and called for a crusade to take Constantinople from the Turks. His army regained some Ćgean Islands and recaptured Belgrade in 1457. Callistus banned Christian and Jewish social interaction. In 1456, he reopened the trail of Joan of Arc, who had been burned at the stake in 1431; his court found her innocent of the charges of witchcraft and heresy. Callistus died on the feast of the Transfiguration, which he had confirmed as a feast of the whole Roman church in honor of his victory at Belgrade, in 1458.