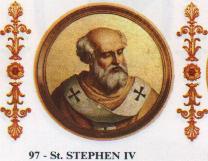 Born c. 720 in Sicily, Stephen III/IV was elected pope in 768 through the influence of the notary Christopher. He was opposed by the antipope Constantine II, who was the brother of Duke Toto of Nepi and who was blinded and degraded the following year. Stephen opposed iconoclasm and forbade lay participation in the election of popes. Stephen is said to have allowed King Desiderius of the Lombards to murder Christopher and his son, Sergius. Stephen also opposed the marriage of Charlemange to King Desiderius' daughter and did nothing when Charlemagne repudiated her. Stephen died in 772.