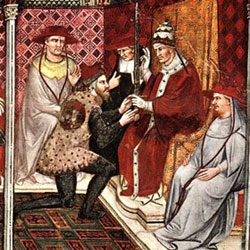 Born Orlando Bandinelli c. 1105, Alexander III was the first great lawyer pope. He taught law at Bologna before becoming an advisor to Adrian IV, whose quarrels with King Frederick Barbarossa continued into Alexander's papacy. In 1157, Adrian called the Holy Roman Empire a benefice of the papacy in a document authored by Cardinal Bandinelli, who later downplayed the fact that benefice usually meant fief. When Adrian died in 1159, the cardinals elected Bandinelli to the see, and the following year, Frederick called his own council at Pavia and had anti-pope Victor IV elected. The pope and the emperor continued to vie for power and for the states of Italy until the Peace of Rialto in 1177. The Third Lateran Council, convoked in 1179, ended unanimous papal elections and established the two-thirds majority rule. Alexander was the first pope to express concern about the Albigenses and was an influence on Peter Abelard. Alexander died in exile in 1181. His body was returned to Rome for burial, and the mob defaced his tomb.