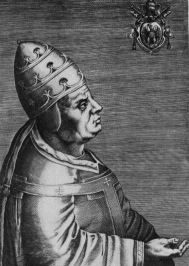 Bartolommeo Prignano was the last person not a cardinal to be elected to the papacy. Born in Naples c 1318, he was made Bishop of Bari in 1377 and was a leading figure at Avignon. He held a post in the chancery before he succeeded Pope Gregory XI as Pope Urban VI in April, 1378. In August of the same year, the French cardinals met at Anagni to nullify the election. They said that they had elected Urban under duress since a mob demanding an Italian pope had threatened them. Scholars say that the cardinals were surprised and upset at Urban's overbearing manner and at his threats to create an Italian majority in the College of Cardinals. The second conclave elected Robert of Geneva as Clement VII. Thus began the Western Schism, which ended in 1417. Urban decreed a Holy Year every 33 years, and shortly before his death in 1389, he ruled that the Visitation of the Virgin to St. Elizabeth, a Franciscan holy day, be celebrated by the whole church.