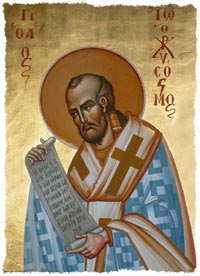 St. Theophilus of Alexandria had little tolerance for anything that was not Christian. After becoming Patriarch of Alexandria in 385, he ordered the destruction of pagan temples in North Africa and used the stones to build churches. He supported Origen until questioned by a group of monks about the immateriality of God. Having pondered the issue for a few years, he condemned Origen c. 400 and began to persecute monks who followed him. When four Origenistic monks appealed to the Patriarch of Constantinople, Theophilus began to attack John Chrysostom and attended the Council of the Oak that deposed Chrysostom in 403. Some believe that Theophilus acted as much out of jealousy over the primacy of Constantinople as from the love of Christian doctrine. When Theophilus died in 412, his nephew Cyril succeeded him as patriarch. Theophilus' correspondence with St. Jerome survives, as do letters to Popes Anastasius I and Innocent I. His tract against Chrysostom is also extant. Jerome translated some of Theophilus' homilies, which are preserved in Migne; other homilies survive only in Coptic and Ge'ez translations. Some scholars believe that Theophilus wrote On the Vision of Isaiah, which had been previously attributed to Jerome.