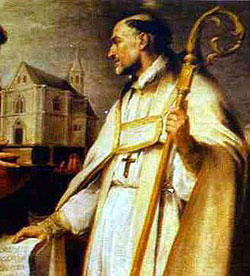 St. Leander of Seville, Bishop (Feast - February 27th) Leander was born at Cartagena, Spain, of Severianus and Theodora, illustrious for their virtue. St. Isidore and Fulgentius, both bishops were his brothers, and his sister, Florentina, is also numbered among the saints. He became a monk at Seville and then the bishop of the See. He was instrumental in converting the two sons Hermenegild and Reccared of the Arian Visigothic King Leovigild. This action earned him the kings's wrath and exile to Constantinople, where he met and became close friends of the Papal Legate, the future Pope Gregory the Great. It was Leander who suggested that Gregory write the famous commentary on the Book of Job called the Moralia. Once back home, under King Reccared, St. Leander began his life work of propagating Christian orthodoxy against the Arians in Spain. The third local Council of Toledo (over which he presided in 589) decreed the consubstantiality of the three Persons of the Trinity and brought about moral reforms. Leander's unerring wisdom and unflagging dedication let the Visigoths and the Suevi back to the true Faith and obtained the gratitude of Gregory the Great. The saintly bishop also composed an influential Rule for nuns and was the first to introduce the Nicene Creed at Mass. Worn out by his many activities in the cause of Christ, Leander died around 600 and was succeeded in the See of Seville by his brother Isidore. The Spanish Church honors Leander as the Doctor of the Faith.

Today, we humbly ask you to defend Catholic Online's independence. 98% of our readers don't give; they simply look the other way. If you donate just $5.00, or whatever you can, Catholic Online could keep thriving for years. Most people donate because Catholic Online is useful. If Catholic Online has given you $5.00 worth of knowledge this year, take a minute to donate. Show the volunteers who bring you reliable, Catholic information that their work matters. If you are one of our rare donors, you have our gratitude and we warmly thank you. Help Now >
Continue reading about St. Leander of Seville 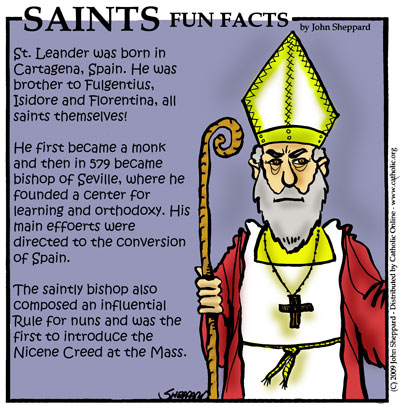