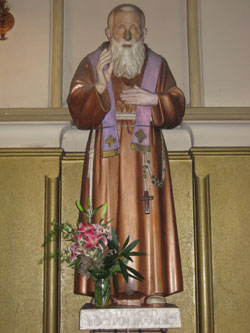 Saint Leopold Bogdan Mandi? was born on May 12, 1866 and died on June 30, 1942. He was an ethnic Croat born in Herceg Novi, in Boka Kotorska (modern-day Montenegro), and died in Padua, Italy. Physically malformed and delicate, having a height of only 1.35m, with clumsy walk and stuttering, he developed tremendous spiritual strength. His feast is celebrated May 12.

Although he wanted to be a missionary in Eastern Europe, he spent almost all of his adult life in Italy, and lived in Padua from 1906 until the end of his life. He spent also one year in Italian prison during WWI, since he did not want to renounce his Croatian nationality. He also dreamed unceasingly about reuniting the Catholic and Orthodox churches and going to the Orient. He became known as Apostle of Confession and Apostle of Unity. He made a famous prayer that is the forerunner of today's Ecumenism.

Bogdan Mandi? was the twelfth child of Dragica Carevi? and Petar Antun Mandi?, owner of an Adriatic fishing fleet; they came from village of Zaku?ac (hinterland of city of Omiš, 28 km from Split). The origins of his family are noble; they came from Vrhbosna province in Bosnia.

He suffered from disabilities that would plague his speech and stature. The family eventually lost most of its wealth, and became more sympathetic to those who suffered in similar situations. In November of 1882 while he was 16, Bogdan went to Udine to enter the seminary of the Venetian Capuchins, and accepted the name "Leopold". Two years later he was put in the Bassano del Grappa friary, where he took the name Leopold. His first profession of vows were made a year later in May and a profession of perpetual vows 4 years latter in 1888.

In the mid-1880s, Croatian Bishop Josip Juraj Strossmayer began a movement which focused on unity and consecration of the cathedral of ?akovo and Srijem, a movement in which Leopold took interest in. On September 20, 1890, Leopold was ordained to the presbyterate at Venice at the age of 24.

Refusing to renounce his Croatian nationality during World War I, Leopold was forced to go to southern Italy. All this time Leopold held a hope that he would be able to return to his homeland and preach among his people, a feat that would be inhibited by his disabilities. On top of his physical deformities, he also suffered from stomach ailments, poor eyesight, and arthritis. Unsurprisingly, the Capuchin ministers declined these attempts due to his health.

While in Italy, Leopold's main vocation was confessions, which he did for 34 years. The Capuchin brothers often criticized Leopold for his approach to confession, calling him too lenient and compassionate. Leopold's compassion showed that he was more understanding and sympathetic to the people that came to him, and would treat them with great sensitivity. He was an outspoken on issues with children, and being pro-life and especially fond of expectant mothers and young children. He did great work in setting up orphanages for children without parents.

Leopold also had a deep devotion to the Virgin Mary who he referred to as "my holy boss". He was known to pray the rosary quite often, and celebrated the eucharist daily at the side altar in the Little Office of the Virgin Mary. He would then visit the sick in nursing homes, hospitals and homes all over Padua. He visited the Capuchin infirmary to comfort the sick friars, giving them words of advice and reminding them to have faith.

Leopold suffererd from esophagus cancer, which would ultimately lead to his death at age 76. On July 30, 1942, while preparing for the liturgy, he collapsed on the floor. He was then brought to his cell, where he was given the last rites. Friars that had gathered at his bed sang "Salve Regina," and when they got to the words, "O clement, O loving, O sweet Virgin Mary," Leopold died.

During the bombing of World War II the church and part of the friary where Leopold lived were demolished, but Leopold's cell and confessional were left unharmed. Leopold had predicted this before his death, saying, "The church and the friary will be hit by the bombs, but not this little cell. Here God exercised so much mercy for people, it must remain as a monument to God's goodness." Paul VI beatified Leopold on May 2, 1976. He was canonized by John Paul II during the Synod of Bishops on October 16, 1983. Leopold is hailed as the "Apostle of Unity."

Hi readers, it seems you use Catholic Online a lot; that's great! It's a little awkward to ask, but we need your help. If you have already donated, we sincerely thank you. We're not salespeople, but we depend on donations averaging $14.76 and fewer than 1% of readers give. If you donate just $5.00, the price of your coffee, Catholic Online School could keep thriving. Thank you. Help Now >
Continue reading about St. Leopold Mandic