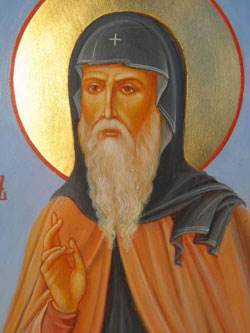 John the Dwarf was a native of Basta in Lower Egypt. He retired to the desert of Skeet when a young man and became a disciple of St. Poemen. John lived a life of obedience, humility, and austerity the rest of his days. When he arrived at Skeet he is reputed to have watered a stick stuck in the ground unquestioningly when his spiritual director ordered him to do so; in the third year of his ministrations, it bore fruit. He left Skeet to escape marauder Berbers and settled on Mount Quolzum, where he died. His feast day is October 17th.