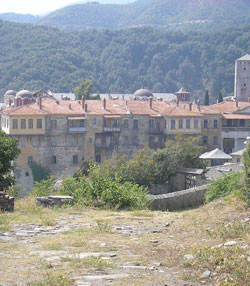 Abbot also called John the Georgian or "the Hagorite." He was a noble of Georgia, sometimes called Iberia, and a military leader. In his middle age, he left his wife and went with his son, St. Euthymius, to Mount Olympias in Bithynia. They then went to Mount Athos in Macedonia and founded a monastery which endured into the twentieth century. John was revered by Byzantine Emperor Constantine VIII.