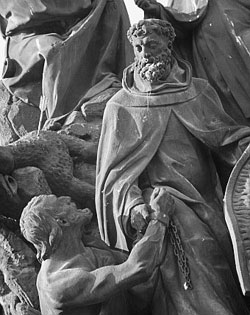 John was born at Faucon, Provence, on June 23, 1160. He was educated at Aix, but on his return to Faucon, lived as a hermit for a time. He then went to Paris where he received his doctorate in theology, was ordained there in 1197, and then joined St. Felix of Valois in his hermitage at Cerfroid. He confided to Felix his idea of founding a religious order to ransom Christian prisoners from the Moslems, and late in 1197, the two went to Rome and received the approval of Pope Innocent III for the Order of the Most Holy Trinity (the Trinitarians), with John as superior, in 1198; they also secured the approval of King Philip Augustus of France. The Order flourished, spread to France, Spain, Italy, and England, sent many of its members to North Africa, and redeemed many captives. John died at Rome on December 17, and his cult was approved in 1655 and again in 1694. His feast day is December 17.