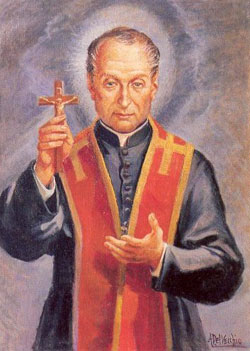 Gaspar, who was born in Rome, the son of a chef, in 1786, received his education as a Collegio Romano and was ordained priest in 1808. Shortly after this, Rome was taken by Napoleon's army, and he, with most of the clergy, was exiled for refusing to deny his allegiance to the Holy See. He returned after the fall of Napoleon to find a wide scope for work, as Rome had for nearly five years, been almost entirely without priests and sacraments. In 1815, Gaspar founded the Congregation of the most Precious Blood with the approval of Pope Pius VII. His wish was to have a house in every diocese, and he chose the most neglected and wicked town or district. The kingdom of Naples was in those days a nest of crime of every kind; no one's life or property was safe, and in 1821 the pope asked Gaspar to found six houses there. He was very happy to do this, but he had many difficulties to overcome before it was accomplished. In 1824, the houses of the congregation were opened to young clergy who wished to be trained specially as missionaries. In his lifetime, their work covered the whole of Italy. Journeying from town to town, enduring endless hardships, threatened often even with death, Gaspar always taking the hardest work himself, they preached their message. One of his principles was that everybody should be made to work. He therefore founded works of charity in Rome for young and old, rich and poor of both sexes. He opened the night oratory, where our Lord is worshipped all night by men, many coming to Him, like Nicodemus, by night who would not have the courage to go to confession by day. His last mission was preached in Rome during the cholera outbreak of 1836. Feeling his strength failing, he returned at once to Albano, and made every preparation for death. After the feast of St. Francis Xavier he went to Rome to die. He received the last sacraments on December 28, and he died the same day. Various miracles had been worked by St. Gaspar during his lifetime, and after his death many graces were obtained by his intercession. He was canonized in 1954.