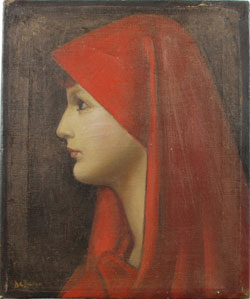 Fabiola was a wealthy Roman Patrician of the famous Fabia family. She was for a time a member of St. Jerome's circle but fell away, divorced her husband for his dissolute life, and remarried. On the death of her second husband, she returned to the Church, devoted herself to charitable works and aiding churches, and built the first Christian public hospital in the West, where she personally tended the sick. She visited Jerome at Bethlehem in 395, supported him in his controversy with Patriarch John of Jerusalem, decided not to join Paula's community, and on her return to Rome, continued her charitable work, opening a hospice for poor pilgrims at Porto with St. Pammachius. Jerome wrote two treatises for her and is the source of most of our information about her. Her feast day is December 27th.