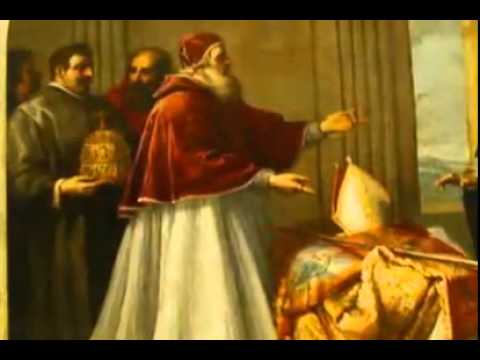 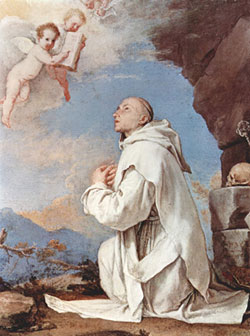 Bruno was born in Cologne of the prominent Hartenfaust family. He studied at the Cathedral school at Rheims, and on his return to Cologne about 1055, was ordained and became a Canon at St. Cunibert's. He returned to Rheims in 1056 as professor of theology, became head of the school the following year, and remained there until 1074, when he was appointed chancellor of Rheims by its archbishop, Manasses. Bruno was forced to flee Rheims when he and several other priests denounced Manasses in 1076 as unfit for the office of Papal Legate. Bruno later returned to Cologne but went back to Rheims in 1080 when Manasses was deposed, and though the people of Rheims wanted to make Bruno archbishop, he decided to pursue an eremitical life. He became a hermit under Abbot St. Robert of Molesmes (who later founded Citeaux) but then moved on to Grenoble with six companions in 1084. They were assigned a place for their hermitages in a desolate, mountainous, alpine area called La Grande Chartreuse, by Bishop St. Hugh of Grenoble, whose confessor Bruno became. They built an oratory and individual cells, roughly followed the rule of St. Benedict, and thus began the Carthusian Order. They embraced a life of poverty, manual work, prayer, and transcribing manuscripts, though as yet they had no written rule. The fame of the group and their founder spread, and in 1090, Bruno was brought to Rome, against his wishes, by Pope Urban II (whom he had taught at Rheims) as Papal Adviser in the reformation of the clergy. Bruno persuaded Urban to allow him to resume his eremitical state, founded St. Mary's at La Torre in Calabria, declined the Pope's offer of the archbishopric of Reggio, became a close friend of Count Robert of Sicily, and remained there until his death on October 6. He wrote several commentaries on the psalms and on St. Paul's epistles. He was never formally canonized because of the Carthusians' aversion to public honors but Pope Leo X granted the Carthusians permission to celebrate his feast in 1514, and his name was placed on the Roman calendar in 1623. His feast day is October 6.

Today, we humbly ask you to defend Catholic Online's independence. 98% of our readers don't give; they simply look the other way. If you donate just $5.00, or whatever you can, Catholic Online could keep thriving for years. Most people donate because Catholic Online is useful. If Catholic Online has given you $5.00 worth of knowledge this year, take a minute to donate. Show the volunteers who bring you reliable, Catholic information that their work matters. If you are one of our rare donors, you have our gratitude and we warmly thank you. Help Now >
Continue reading about St. Bruno 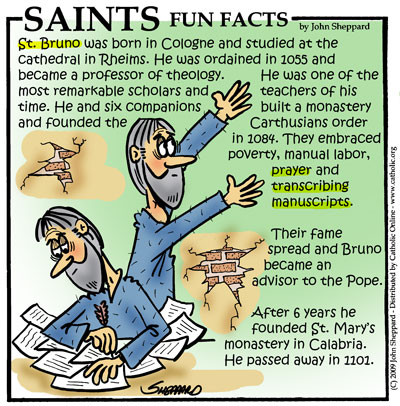