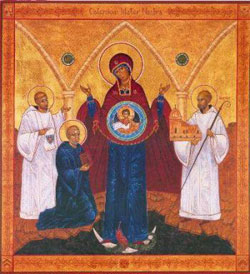 Benedictine abbot and reformer and the founder of the abbey of Citeaux, France, which became the motherhouse of the great monastic order of the Cistercians. A native of Troyes, he was born to noble parents in Champagne. At the age of fifteen, he entered the Benedictine Abbey of Moutier la Celle, near Troyes, where he became prior and abbot of Saint Michael de Tonnere in 1068. He attempted to introduce extensive reforms to the community but met with such resistance that he retired in 1071 and returned to Moutier la Celle. Soon after, a group of hermits in the forest of Collan petitioned Robert to become their head. At first he declined, but the monks persevered and, after winning papal approval for their community, they convinced Robert to accept. In 1074, Robert moved the hermits into the monastery he established at Molesmes. Within a few years, Molesmes grew in size and wealth, and with the prosperity came laxity of discipline. Robert tried without success to resist, and so resigned, going to the hermitage at Or. Though recalled, he remained only until 1098 when he stepped down once more in the face of obdurate resistance by the monks to reinstate full monastic rigor. After winning permission, Robert left with twenty one monks and founded a new community at Citeaux on March 21, 1098. Called by Robert the Novum Monasterium, Citeaux was established with the invaluable aid of Eudes II, duke of Burgundy, and soon acquired much fame for the depth of its spirituality. Much chastened, the monks of Molesmes petitioned to have Robert returned to them. As its abbot once more, Robert turned Molesmes into a leading center for reform, while Citeaux became the heart of the Cistercian order. Robert died as abbot of Molesmes; this was soon extended to the Universal Chruch.