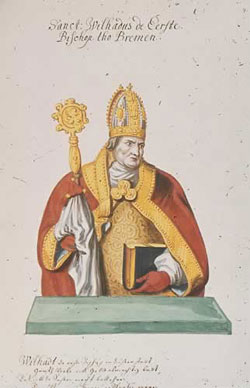 Benedictine missionary and bishop. A native of Northumbria, England, he studied at York, was a friend of Blessed Alcuin, and became a monk in York or Ripon. About 766, he embarked upon a journey to preach among the Frisians of the Netherlands. He preached at Dokkum and Overyssel, but was forced to flee with his companions because of the violent pagan reaction. In 780, at the request of Charlemagne (r. 768-814), he became a missionary among the Saxons, but again he was forced to flee, owing to the Saxon uprising against the Franks. He went to Rome to make a report ofhis activities to Pope Adrian I (r. 772-795) and spent two years at Echternach monastery in Luxembourg. Wufrid gathered together missionary resources, and after Charlemagne's reconquest of Saxony, he received an appointrnent as bishop of Worms, Germany, in 787, with his seat at Bremen and ruissionary authority over the Saxons. He died at Bremen a few days after dedicating the cathedral of St. Peter.