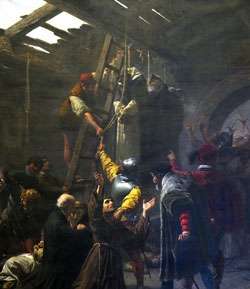 Franciscan martyr. A Dane by birth, baptized in 1483 as Anthony, he was exiled from Denmark at the onset of the Protestant Reformation in his country. He went to the ill-fated Franciscan friary at Gorkum, in the Netherlands, and was thus among the Franciscans who were condemned and hanged by the Protestants at Biel. At the time of his death, he was ninety.