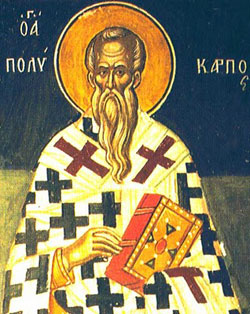 Bishop of Smyrna, martyr, and one of the foremost leaders of the Church in the second century. Few details of his life are extant with any reliability beyond his famous martyrdom, which was recounted in the Martyrium Polycarpi. It is believed, however, that he was converted to the faith by St. John the Evangelist about 80 A.D. and became bishop of Smyrna about 96 A.D. He was, as was his friend St. Ignatius of Antioch, one of the most important intermediary links between the apostolic and the patristic eras in the Church, especially in Christian Asia Minor. A defender of orthodoxy, he opposed such heretical groups as the Marcionites and Valentinians. He also authored a surviving epistle to the Philippians, exhorting them to remain strong in the faith. The letter is of great interest to scholars because it demonstrates the existence of New Testament texts, with quotes from Matthew and Luke, the Acts of the Apostles, and the first letters of Peter and John. When Ignatius was being taken to Rome to be put to death, he wrote of Polycarp being clothed "with the garment of grace." Polycarp was himself arrested by Roman officials in Smyrna soon after returning from a trip to Rome to discuss the date for Easter. He refused to abjure the faith, telling his captain that he had served Christ for eighty six years. The Romans burned him alive with twelve companions. The year of his death has been put at 155 or 156, although Eusebius of Caesarea places the year at 167 or 168, meaning it would have fallen in the reign of Marcus Aurelius. If so, changes in the year of his birth would be necessary. The most detailed account of his death was the Martyrium Polycarpi.