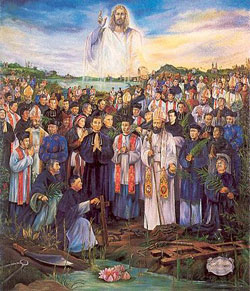 Martyrs in Vietnam. Peter Domoulin Bori was originally from France, and joined the Foreign Missions of Paris in 1829. He was assigned to Vietnam in 1832 after his ordination. Arrested in 1836, he was imprisoned and was appointed a titular bishop and vicar apostolic while incarcerated. He was beheaded, and two native priests who shared his imprisonment, Peter Khoa and Vincent Diem, were strangled. All three were canonized by Pope John Paul II in 1988.