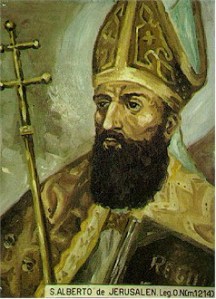 Albert was of a well known family in Parma, Italy. He studied theology and law, became a canon at Holy Cross Abbey in Mortara and in 1184, became bishop of Bobbio. He was shortly after translated to Vercelli, mediated a dispute between Frederick Barbarosa and Pope Clement III, was Pope Innocent III's legate to Northern Italy, and in 1199 negotiated a peace between Parma and Piacenza. In 1205, he was appointed patriarch of Jerusalem, which had been established as a Latin kingdom by the Crusaders in 1099. Since the Saracens had recaptured Jerusalem in 1187, he was obliged to establish a See at Akka. He took a prominent role in the civil and ecclesiastical affairs of the kingdom, often mediating disputes between the different Frankish factions. He is especially known for a rule he composed for St. Brocard, Prior of the hermits living on Mount Carmel, which became the first Rule of the Carmelites. He was stabbed in Akka by a man he had discharged as head of Holy Ghost hospital there.