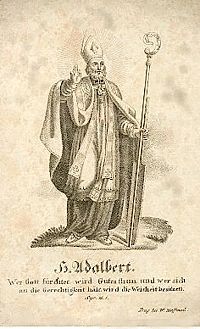 A monk of St. Maximin Benedictine monastery in Treves, Albert was sent by Emperor Otto the Great to convert the Russian subjects of Princess Olga at her request after she became a Christian in Constantinople at 70 years of age. When Olga's son Svyatoslav, a pagan, took the crown from her in 961, the missionaries were forced to flee, and some were killed near Kiev. Albert escaped, spent four years at the imperial court in Mainz, and then was made abbot of Weissenburg Abbey, where he became known as a patron of learning. In 962, at Otto's insistence, he was named first archbishop of Magdeburg, Saxony, with jurisdiction over the Slavs. He spent the rest of his life trying to spread Christianity among the Wends and reforming religious groups in his diocese. He died on a visit to Merseburg.