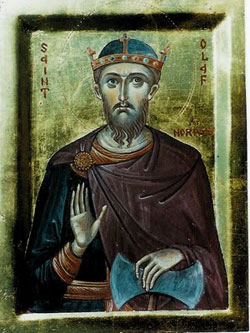 Olaf was the son of Harold Grenske, a lord in Norway. Olaf Haraldsson, often called "the Fat", spent his youth as a pirate. He was baptized in Rouen, and in 1013, went to England to aid King Ethelred against the Danes. He returned to Norway in 1015, captured most of Norway back from the Danes and Swedes, defeated Earl Sweyn at the battle of Nesjar in 1016, and became king. He set about unifying and Christianizing his realm, but the harshness of his rule precipitated a revolt of the nobles in 1029, and aided by Canute of Denmark, they defeated him and forced him to flee to Russia. He returned in 1030 and attempted to recover his kingdom, but was slain at the Battle of Stiklestad in Norway on July 29th. Though not too popular during his lifetime, miracles were reported at his shrine, and a chapel was built, which became the cathedral of Trondheim; it became a great pilgrimage center for all Scandinavia. He is one of the great heroes of Norway for his efforts to unify and Christianize Norway, of which he is patron. He was canonized in 1164 and his feast day is July 29th.